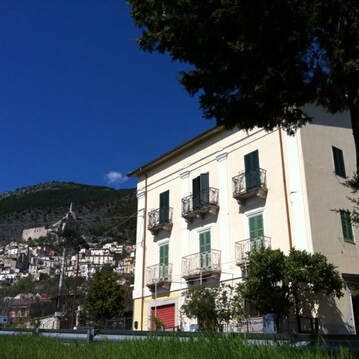 Your Unique Bed and Breakfast
La Rocca Mia House is a unique B&B that allows guests to experience authentic Italian life. We invite you to come discover the magic of Abruzzo, an easy 1 ½ hour drive east of Rome.   Learn about this rustic land of Ovid where ancient hilltop castles, dense forests and fertile valleys lay beneath the shadow of expansive and stunning mountain ranges.

​Experience Abruzzo’s distinct culture through its artisanal foods, medieval abbeys, folkloric traditions and numerous mountain villages. It is a favorite destination for travelers from around the world: whether it be bike riding, hiking or kayaking in the summer, harvesting grapes or olives in the fall, skiing in the winter or simply enjoying the award winning local wines, food and beauty of this special and diverse area.

At ​La Rocca Mia House, we have created an Experiential Travel concept which allows guests to design a travel package that is flexible and reflects their interests.  Your customized travel experiences will be offered to small groups up to 12 people.  We are located in the magical medieval town of Roccacasale at the foot of an ancient castle. Charming ‘new’ settlements have taken place increasingly downstream outlining our charming and friendly village that unfolds along a large and highly scenographic slope offering breathtaking views of the entire Peligna Valley.
​
The Story of our House
In the early 1900's,  Luigi and Nunziata D'Ascano started their family in the small village of Roccacasale, Italy.   In 1903, their son, Antonio was born, the oldest of four children. In 1914, Luigi immigrated to America , leaving his wife and sons to build 'the biggest house they could' with the money he would send home.  His sons and their families along with their mother all lived in the house together.

Eventually, Antonio and his wife Angela had 9 children and with no work and no money he decided to immigrate to Canada in 1959.  Michele (Antonio's brother) and his family remained on the third floor and until this day Michele's son, Vittorio and his wife, live there.  Antonio had sold his portion of the house.  The new owners, Fernanda D'Ascanio (no relations) along with her father and brother took over the first and second floors.  They opened their home to travelers and used the first floor as an Evangelical church.  After her death, the house was inherited by her two nieces from which we bought the house.

This house has now become La Rocca Mia House which was purchased in 2014,  and after 2 years of renovations it opened its doors in 2016 as a unique Bed and Breakfast.  The structure of the house and garden has stayed the same but some modern touches have been added.